Last Friday I was invited by the London Rally School to take part in their £195 Monte Carlo Half Day Course. It was the best fun I’ve had for quite a while. I had wanted to do a bit of rally-driving for a very long time, but for some reason it had always been other activities that ended up in my diary so far.

London Rally School is part of Banzai Action Sports, which is family-owned and -operated. Banzai offer all kinds of other adventure activities from an adjacent building, such as paintballing, quad-biking, target shooting, off-roading, axe-throwing, and rides on Rage Buggies. I joined four other participants who had booked a full day. They had already completed their morning session. Mike, our instructor, greeted me friendly. We were his first students of the year, as the School had only just re-opened after the UK’s months-long, third lockdown.

Video (c) LRS, all pics (c) BSqB except the first pic below of the Impreza

We went through about twenty minutes of safety training and rally driving theory, then we took our turns driving the Ford Escort around the triangle that was marked with traffic cones on the yard in front of the building. 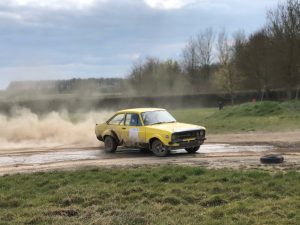 We practiced doing handbrake turns and power turns and a number of other moves. It turned out that I’m 100% useless with the handbrake. I just couldn’t get my head around it, it is so counter-intuitive to me. I asked Mike if it was okay to simply focus on power-turns, and turned out that was just fine. You basically push the gas pedal down and steer largely by regulating the power, not so much by using the steering wheel. You only move the steering wheel in order to keep your front wheels pointing in the direction of travelling after you’ve done the steering with your gas pedal.

Even though we probably never exceeded 40km/h, considering each length of the triangle is only 30m long or less, it was an exhilarating experience to slide around the yard, throwing up dust.

Next up we were let loose in the Ford Escort on the ‘stage’, i.e. the short race track that meanders through the woodlands and across the fields next to the buildings. My guess is that we reached about 120km/h on the longest straight stretch, but it sure as hell felt more like 240km/h on these bumpy dirt tracks.

The rear-wheel drive of the Escort makes for perfect classic sliding around the corners. I felt like I had always been meant to do this. Should I switch careers and become a full-time rally driver? There is a fair bit of money to be made if you’re good at your job, I hear?

This was kick-ass. The other four dudes clearly felt the same. None of us were able to wipe the big smiles off our faces.

Then we received some training and instructions on the 4WD Subaru. Mike didn’t beat about the bush: this car would be a lot more difficult to drive. Much heavier, and the 4WD would take some time getting used to.

The other participants seemed to handle it pretty well. One of them in particular seemed to have been born in an Impreza, roughly 60 years ago. I had a lot of fun trying to figure out how to drive that thing, but truth be told, I did not exactly excel.

The team agreed that I looked pretty fast, largely because I was throwing up so much dirt. The others were driving much more smoothly, producing much smaller dust clouds on the track. When the finishing times were announced for our respective second laps, I was shocked to hear that I had been a whole 16 seconds slower than the best racer: 153 seconds instead of his stellar 137.

There is only one conclusion here: I will need to come back as a paying customer for a full day to get a few more practice rounds under my belt. Probably this summer. 5 out of 5 in my book.

Drinking on planes.. love it? Necessary? Avoid it? 👀

@BerkeleySqB Thanks for the pillbox info! I wondered what they were for 😁