The Amazing Chihuly in Kew Gardens: ‘Reflections on Nature’

One of Ms B’s and my biggest regrets in 2019 is that we only visited Dale Chihuly’s ‘Reflections on Nature’ exhibition of glass sculptures in Kew Gardens a few days ago, and not much earlier, thus missing out on the opportunity to return again and again. The exhibition will close forever on 27 October after a hugely successful six months.

Ms B, whose nick name at school apparently was ‘voucher chick’, managed to find us a 50% discount, which brought the ticket’s price down to £9 per person (deal can be found here) Even the full price of £18 is extremely good value for what you get. They also offer great deals for families.

We’ve been big fans of Chihuly’s for many years now, and especially of his large-scale outdoor sculptures. His equally well-received 2005 Kew Gardens exhibition was one we missed out on, because Ms B was busy settling in and I had not relocated to the Big Smoke yet, not for another few months. 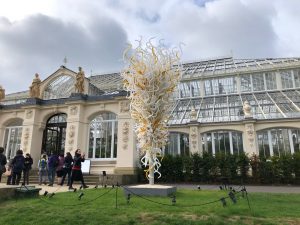 The artist has mentioned on many occasions how perhaps the world’s most biodiverse place is very special to him and our hope is that next time won’t involve another nearly 15 years waiting time before he’s back.

32 of his large-scale installations, most not seen in the UK before, are spread all over the grounds, mostly outside, but some also inside the various glass houses. The famous blue masterpiece Sapphire Star (2010) looks like an exploding blue and white lollipop caught on a high-speed camera still and greets visitors near the entrance at Victoria Gate. There is also an exhibition of his smaller objects and sculptures located in the indoor exhibition space.

Another one of our favourites was the iconic Scarlet and Yellow Icicle Tower installed at one end of the Syon vista. The giant structure consists of more than 1,800 separate elements. The Niijima Floats (a series of glass bubbles, some as heavy as 30kg) spread over the Japanese Gardens next to the Great Pagoda took us some getting used to, but in the end we decided that we found them decorative enough. A real fun factor were several couples of senseless parents who kept on letting their crazed two-year olds run onto the restricted area, coming dangerously close to the very expensive and fragile sculptures. The security wardens were forced to call on the parents again and again, seemingly to no effect. Some people.. haha..

Summer Sun (feature photo above), consisting of nearly 1,500 separate elements and located next to the Palm House Lake, is one of a series of sun sculptures that date back to 1998. The Opal and Amber Tower evolved from Chihuly’s fascination with chandeliers like the one he created for the V&A in 2001.

Without doubt, the masterpiece of the exhibition is the nine-metre long pendant of blue Temperate House Persians (2019) dangling from the ceiling of the recently restored glasshouse and created especially for the Kew exhibition. The sculpture will remain a permanent fixture, adding to London’s growing collection of Chihuly’s works such as the chandeliers at Claridge’s and the V&A Museum.

Chihuly, now 78, has been quoted as saying that he wants his art “to appear like it came from nature, so that if someone found it on a beach or in the forest, they might think it belonged there.” And also: “I want people to be overwhelmed with light and colour in a way they have never experienced.”

The old man’s artistic development over the years and his whole life are rather fascinating. After a difficult childhood, losing both his only brother and his father, he started his career with weaving. It was in 1963, at a University of Washington weaving class that he first incorporated glass shards into tapestries. This triggered his life-long love for glass as a material. In 1965 he blew his first glass bubble, from which point onward there was no turning back. Less than a year later he received a full scholarship to attend the University of Wisconsin-Madison where he studied under Harvey Littleton, who had established the first glass program in the United States at the university. In 1967, Chihuly received a Master of Science degree in sculpture.

Within just a few years he found worldwide fame with his art that seemed to merge decoration and fine art. From the beginning he pushed the boundaries of what’s physically possible to do with glass. Chihuly always suffered severely from bipolar disorder. A 1976 car crash robbed him of his sight in one of his eyes and caused lasting damage to his legs. So early on, the artist relied on others to do most or all of the physical work for him, especially on the bigger pieces. Today he employs more than 100 staff. The most complicated sculptures, his so-called Rotolos, each require the simultaneous involvement of more than 15 of his staff. Each year his studio churns out some 30-odd large-scale sculptures and thousands of smaller ones. In most cases the artist himself is not physically present while the art gets created.

For a few years now a dark shadow has been sitting over the artist’s head and according to his own words severely negatively impacted him. It hits at the centre of his world: his originality. A former member of staff sued him for millions of dollars claiming that his contribution to the artwork has not been remunerated and credited adequately.

It is an interesting question to ask, of course, what is originality, and a question highly relevant for many of today’s artists around the world who have large studios where dozens of highly trained staff do most of the work, think Ai Weiwei or Anish Kapoor, for example. In any case, we hope Chihuly wins his court battle and gets to live his later years in peace. There is still so much the old man has on his agenda, for example with his many charitable efforts, his campaign to make art accessible to everyone, and his career as a teacher and educator. This guy thinks big with everything he does. His Sculpture Garden is the highest ranking Seattle tourist attraction on Tripadvisor, even before the Space Needle.

Looking for more articles about art? Check out our posts on Ai Weiwei at the Royal Academy of Art, David Hockney at Tate Britain, or Being Modern at Fondation Louis Vuitton in Paris.

For adventure and fun activities feel free to have a look at our posts about jetlevving near Cambridge, riding a very fast rubber boat on the Thames in London, and riding an even faster rubber boat near the North Pole (Spitsbergen).

Lisbon in a Day