The Landshut Wedding – One of the Biggest Medieval Pageants in Europe 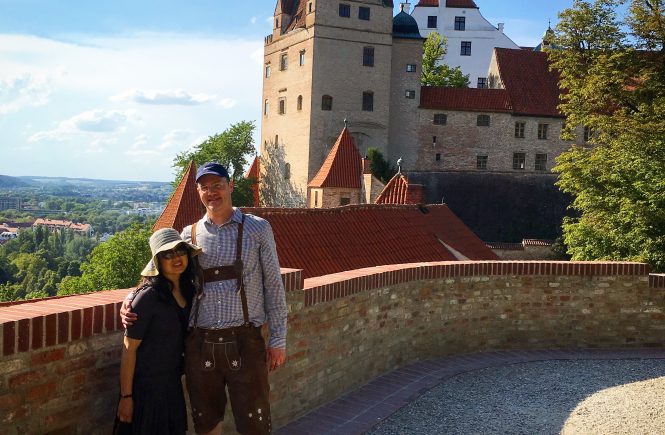 MsB and I have just returned from our trip to Bavaria, where we visited the phenomenal Landshut Wedding, one of the biggest medieval pageants of Europe.

The event is held every four years since 1903 in the Lower Bavarian town of Landshut (55,000 residents), only 45 minutes by train or car from Bavaria’s capital, Munich. It attracts close to one million visitors. Several thousand locals dress up every day for three weeks and re-enact the wedding between Hedwig, the Polish King’s daughter, and George “the Rich”, the son of the Duke of Bavaria, in 1475 A.D. 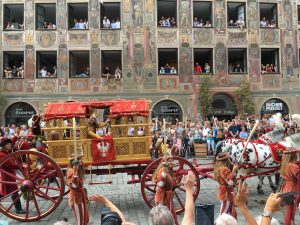 This wedding was so outrageously pompous it continued to be talked about for centuries. 10,000 guests jubilated, celebrated, danced, and feasted for a full four days back then. 320 cows, 1,500 sheep, 1,300 lambs, 500 calves, and no less than 40,000 chickens met their maker during this long weekend. 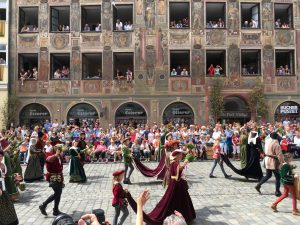 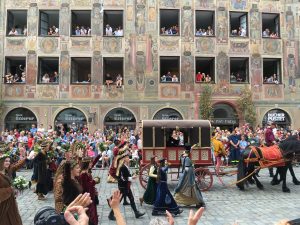 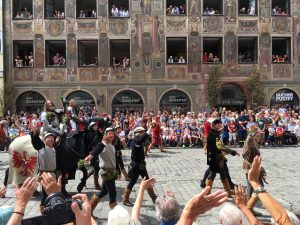 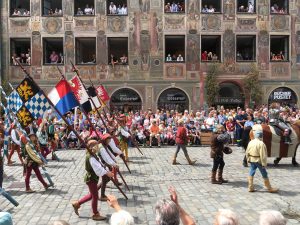 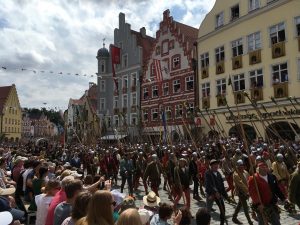 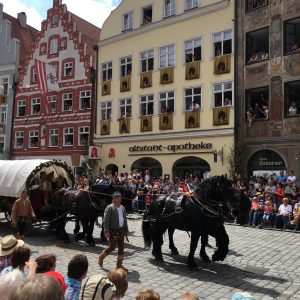 The fact that the marriage had been arranged and negotiated between diplomats for several weeks a year earlier without the wedding couple’s involvement, did no harm to the festivities. After all, the Turks were at the gates, and a strategic wedding was called for. And who would want to be a party pooper at a party like this, right? 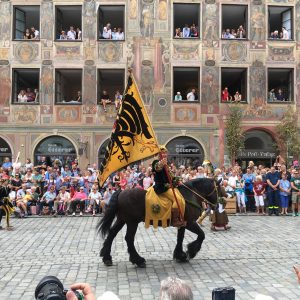 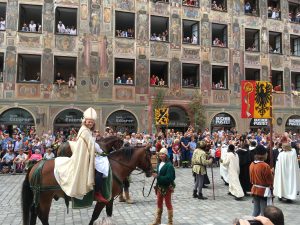 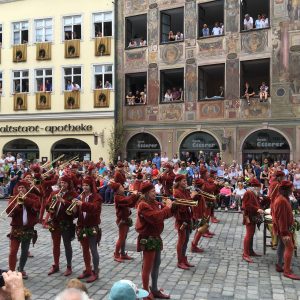 The Polish king was presumably having a bit of a party by himself in Poland at the same time. After all, he had just received the equivalent of 6 million pounds Sterling in today’s money for giving his daughter away to a life of luxury. 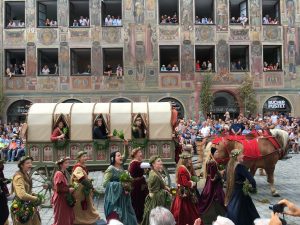 We had not planned our visit, but decided on short notice to go to Landshut, when another trip we had been scheduled to do was cancelled. This meant that we did not have any tickets to any of the large number of separate events. However, in the end we did manage to get our hands on some tickets. We missed out on the jousting, which was a pity, but we managed to get top seats to watch Sunday’s wedding procession and the play in the historic town hall. 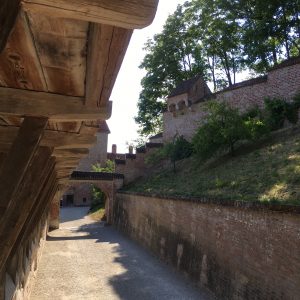 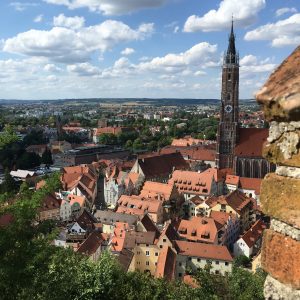 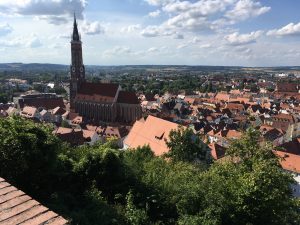 We spent most of our time just walking about town, where there were groups of lay actors in full gear, playing music, performing dance shows, or just marching around with lances and spears. We thoroughly enjoyed our brief visit to the castle (great views!) and various beer gardens.

In the evening, we made our way to the area around the tournament place, where the atmosphere was marvellous, with thousands of people trying out the local food and drink. We decided right there that we’d give the Oktoberfest beer tents a miss anytime, when we have the chance to do the Landshut Wedding.

Looking for more travel and adventure inspiration? Feel welcome to check out our posts about England’s Medieval Festival, our Norfolk Seal Safari, and our ride in a hot air balloon over Wiltshire. 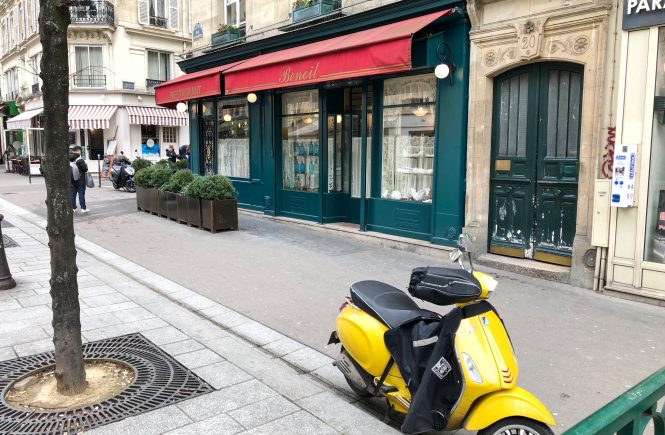 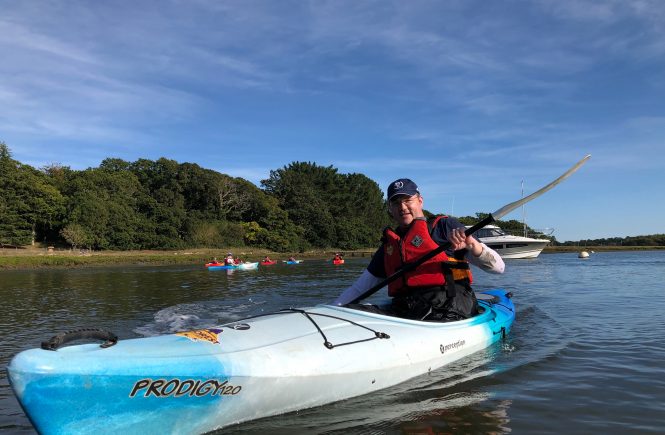 Kayaking with ‘New Forest Activities’ – Fair bit of exercise, fabulous fun, and you get to see jellyfish! 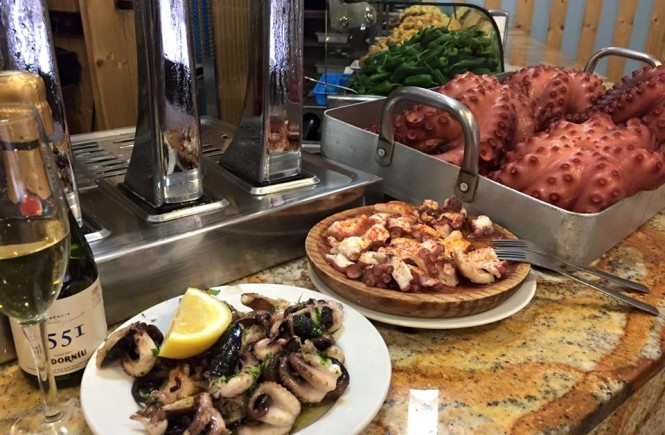 @BerkeleySqB Haha silly you. Time for your appointment btw 😜

A 48 hour time lapse of a blizzard…

"This used to be a nice neighbourhood before the old ladies started moving in. Nowadays some of us daren't even go down to the shops."

Am I the only person who became a “travel” writer and then realized the genre was incurably vapid, wealth-obsessed, and earth-destructive, and is seeking ways out? Just me? Cool, cool, cool